On this blog we will share our Wildheart Project with you. We will update it as we go. Feel free to comment our blog posts and share this blog with all your friends.

“Wildheart” is a song specially written and dedicated to all kids growing up being “different” just by being who they are, not fitting in to a world others say or think is the right, suffering from anxiety, panic disorder and being pushed down by others to not believe in themselves. This song is to tell you that you are good just as you are, that no one deserves to be treated that way and that you are our true heroes. First and foremost this song is dedicated with the greatest of dads´ love to my wonderful kids Josephine, Simon and Andreas.

The story of the “Wildheart” song project began in September 2018 when the Swedish songwriter and musician Peter Gunnebro and his daughter Josephine Aurora Gunnebro decided to go to Nashville to experience the “Nashville Music Spirit” together. They were both completely exalted by the musical melting pot Nashville really is. In a Uber Cab they met driver Rick McDonough and today the song “Wildheart” is a fact.

My kids grew up with great difficulties in school. Everything from having concentration difficulties to having panic attacks in large groups with others. They often felt misplaced and have had difficulties focusing on their school assignments. No one really knew during all these years why, but as a parent I have seen my kids feel so bad and it hurts deep in the heart to see my kids feel bad, sad, lonely and sometimes frustrated over their situation. I many times felt helpless knowing that the last thing one’s kid wanted in the morning was to go to school and have another day of hell. As a result, they didn´t obtain approved grades, they were hiding someplace else and were not even there. It was just too much for them.

There are so many kids going through the same hell growing up and they need to be seen and helped.

Countless meetings with teachers at the school, usually with no results, and after the meeting having a kid who, if possible, feels even worse than before the meeting.

The years went by and my kids chose a specialization in college. The same thing here, nothing had changed except they had become a few years older.

At the end of college, we managed to make an investigation that showed that they have neuropsychiatric disability, ADD or ADHD. Knowing this changed a lot for them as well as for us as parents. We finally got an explanation why it was so difficult for them in school. And the best part was to become aware that there is help to get that makes everyday life easier.

Today my eldest son has a job, family and a wonderful son. I am a proud grandfather.

My middle son worked hard his last year in school and today works as a bricklayer. He has a great interest in music and plays drums, guitars and electric bass.

My daughter put in a high gear and graduated with approved grades. Today she runs her own company with a beauty salon and it goes well for her. She has a great musical interest and sings a lot.

With the right help, support and a belief in themselves the kids will do well, even with this type of challanges.

I am a songwriter and musician in Sweden and I play guitar, and for some years now also pedal steel. I’ve been given the privilege of getting to know one of the finest steel guitarist in the world, Travis Toy, by taking online lessons from him for some time now. I love country music and have always wanted to go to Nashville, and hoped to get to meet Travis in real life.

As a reward for my daughter’s big achievement, I asked her if she wanted to go with me to Nashville, and she wanted it.

When we arrived in Nashville, one day we ordered a UBER taxi. We were met by a very nice and talkative driver and gentleman who presented himself as Rick. He asked us what brought us to Nashville, whether it was work or pleasure. We answered him that we had come to Nashville to experience the Nashville vibe, listen to good music and meet new people. Rick told us that he has a son named Adam who works as a professional songwriter and musician. He was performing at BB Kings Blues Bar downtown and Rick asked if we wanted to come down and listen the next day. We answered that we would love to do so.

Said and done, the day after we went down to BB Kings Blues Bar and there sat Rick waiting for us. Adam began to play and we were greatly impressed by Adam’s talent. He was awesome!

We sat there at BB´s, listened to Adam, talked and drank a few beers for five hours!

A few days later we were invited to Ricks place to hang with him, Adam and his family by the pool. It was nearly 95 °F (35 °C). That day was a blast and Adam, Rick and I decided we should start to write some music together.

A few days later me, Josephine and Travis Toy decided to meet and go out for lunch. It was really nice meeting him, he´s the nicest person!

Our Nashville trip was coming to an end for this time and we went back home to Sweden, overwhelmed by new experiences and some new fantastic American friends!

This trip inspired me to write new songs and I felt I wanted to write a song specifically for my kids to cherish them and show my great love for them. I also wanted my daughter to sing on it together with Adam. I wrote and recorded the music to Wildheart and sent it over to Rick and Adam and explained what it was all about, a song for all young people who are going through the same hell as my own kids have gone through, to start believing in themselves and to be proud of themselves.

I asked them if they would like to write the lyrics and they did, in a fantastic father and son collaboration! In fact Rick told me he had grown up having a hard time himself as a kid, so he knew exactly what I was talking about.

Adam sent the files over to my recording studio in Sweden and I asked my musician friends to record with me.

Josephine came to the studio and recorded her wonderful voice together with Adams and it turned out beautifully!

When all the parts where in place I asked Travis if he would like to play pedal steel on the song. He said yes, did so, and sent his recording over to me to add it to the mix.

When everything was mixed and mastered Josephine, Rick,  Adam and I had a video call asking ourselves what to do with the song now, once it´s ready. We decided that we should go back to Nashville this summer and perform “Wildheart” along with a mix of other songs, some written by Adam and some written by me. We will be backed up by the awesome guys from Adams band. This will be an exciting, once in a lifetime father/son, father/daughter family union experience at Alley Taps, Nashville on Aug 23 at 7 p.m.

Hope to see you there! 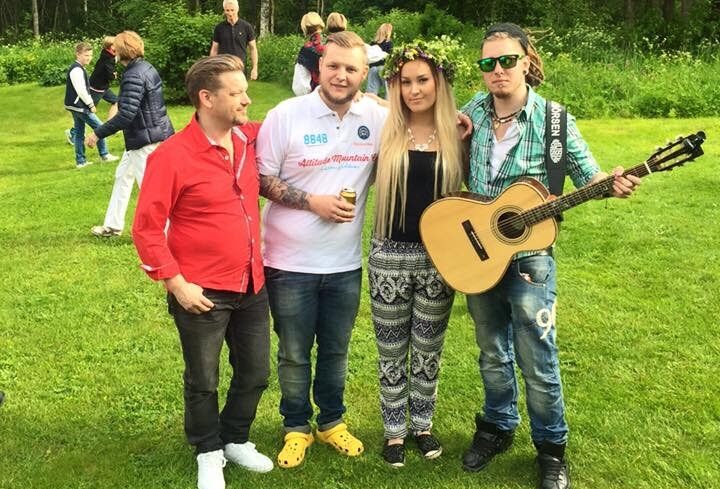